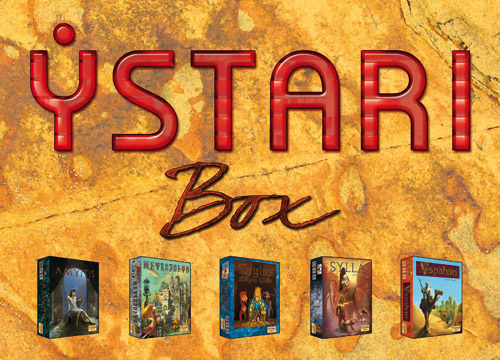 For the next Essen fair, in October 2009, we will sell an expansion box for 5 games of the ystari line: Amyitis, Caylus Magna Carta, Metropolys, Sylla and Yspahan. This box will cost less than 20 € and should replete many fans who want some kind of renewal. If you don’t go to Essen, don’t worry because the box will hit the shelves later. There will be 3 kinds of expansions, one big (for Caylus Magna Carta), 2 medium and 2 small for Metropolys and Yspahan (respectively a few objectives and a few cards).

Caveant Consules: Sylla will feature 2 new characters, 2 new events and one new great work: the forum, which provides a res publica token of each color to the player with the most votes and a token choice for the second player. When you give the votes to the Plebeians, you get 2 points for each set of 3 votes.

The gladiator provides one point in phase IV; its peculiarity is that it counts as a leisure token (green) in case of crisis. As for the philosopher, it combines with another character in order to double its power (2 coins for a merchant, 2 votes for a senator, etc.). 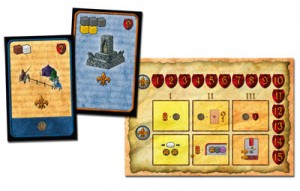 Royal favor: Caylus Magna Carta will now support up to 5 players and will add a few new buildings (including prestige buildings) which can grant some royal favors. A small board will allow you those favors and gain some resources, victory points or permanent powers. For instance, you may sacrifice a worker for a whole round in exchange for a denier or a resource.

Nebuchadnezzar’s palace: Amyitis will be embellished with a palace and a new craft to get in: the courtier. Depending on your investment in the palace, you may become the first player, do the procession, recruit any character, or get a courtier. 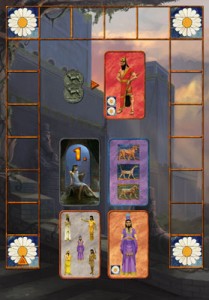 The RIO GRANDE GAMES expansion also includes an expansion for Mykerinos : The Nile !