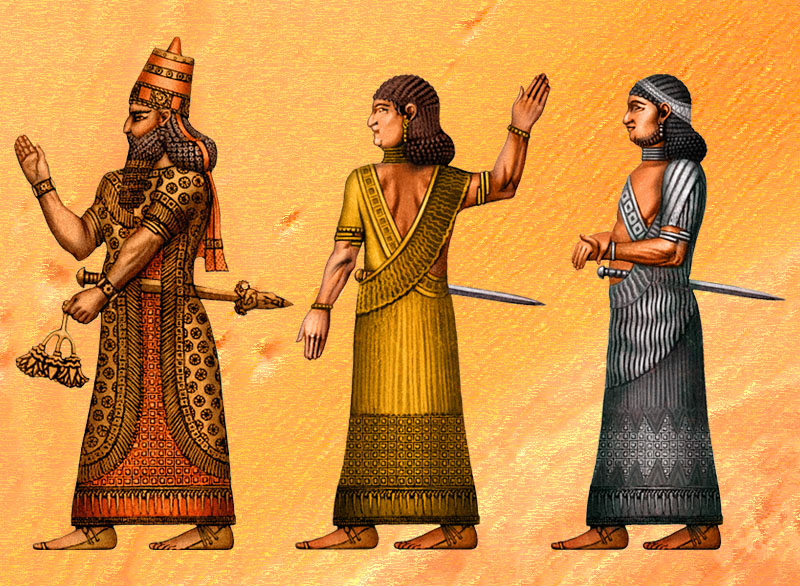 Assyria was a civilization centered on the Upper Tigris river, in Mesopotamia (Iraq), that came to rule regional empires a number of times in history. It was named for its original capital, the ancient city of Assur. The term Assyria can also refer to the geographic region or heartland where these empires were centered.
During the Old Assyrian period (20th to 15th c. BCE, Assur controlled much of Upper Mesopotamia. In the Middle Assyrian period (15th to 10th c. BCE), its influence waned and was subsequently regained in a series of conquests. The Neo-Assyrian Empire of the Early Iron Age (911 – 612 BCE) expanded further, and under Ashurbanipal (r. 668 – 627 BCE) for a few decades controlled all of the Fertile Crescent, as well as Egypt, before succumbing to Neo-Babylonian and Median expansion, which were in turn conquered by the Persian Empire.

Early history
The earliest neolithic site in Assyria is at Tell Hassuna, the center of the Hassuna culture in Iraq. Of the early history of the kingdom of Assyria, little is positively known. According to some Judaeo-Christian traditions, the city of Ashur (also spelled Assur) was founded by Ashur the son of Shem, who was deified by later generations as the city’s patron god. The upper Tigris River valley seems to have been ruled by Sumer, Akkad, and northern Babylonia in its earliest stages. The Akkadian Empire of Sargon the Great claimed to encompass the surrounding « four quarters »; the regions north of the Akkadian homeland had been known as Subartu. It was destroyed by barbarian Gutian people in the Gutian period, then rebuilt, and ended up being governed as part of the Empire of the 3rd dynasty of Ur.

City state of Ashur
The city-state of Ashur had extensive contact with cities on the Anatolian plateau. The Assyrians established « merchant colonies » in Cappadocia, e.g., at Kanesh (modern Kültepe) circa 1920 BC – 1840 BC and 1798 BC – 1740 BC. These colonies, called karum, the Akkadian word for ‘port’, were attached to Anatolian cities, but physically separate, and had special tax status. They must have arisen from a long tradition of trade between Ashur and the Anatolian cities, but no archaeological or written records show this. The trade consisted of metal (perhaps lead or tin; the terminology here is not entirely clear) and textiles from Assyria, that were traded for precious metals in Anatolia.
Like many commercial city-states in history, Assur was to a great extent an oligarchy rather than a monarchy. Authority was considered to lie with « the City », and the polity had three main centres of power — an assembly of elders, a hereditary ruler, and an eponym. The ruler presided over the assembly and carried out its decisions. He was not referred to with the usual Akkadian term for « king », šarrum; that was instead reserved for the city’s patron deity Assur, of whom the ruler was the high priest. The ruler himself was only designated as « the steward of Assur », where the term for steward is a borrowing from Sumerian ensi(k). The third centre of power was the eponym (limmum), who gave the year his name, similarly to the archons and consuls of Classical Antiquity. He was annually elected by lot and was responsible for the economic administration of the city, which included the power to detain people and confiscate property. The institution of the eponym as well as the formula iššiak Assur lingered on as ceremonial vestiges of this early system throughout the history of the Assyrian monarchy.

Assyrian expansion
Hanilgalbat was finally conquered under Adad-nirari I, who described himself as a « Great-King » (Sharru rabû) in letters to the Hittite rulers. The successor of Adad-nirari I, Shalmaneser I (c. 1300 BC), threw off the pretense of Babylonian suzerainty, made Kalhu his capital, and continued expansion to the northwest, mainly at the expense of the Hittites, reaching Carchemish and beyond.
Shalmaneser’s son and successor, Tukulti-Ninurta I, deposed Kadashman-Buriash of Babylon and ruled there himself as king for seven years, taking on the old title « King of Sumer and Akkad ». Another weak period for Assyria followed when Babylon revolted against Tukulti-Ninurta, and later even made Assyria tributary during the reigns of the Babylonian kings Melishipak II and Marduk-apal-iddin I.
The correct chronology of these Assyrian kings is still is much debated. There are four crucial solar eclipse records. For example, the Assyrian eclipse associated with June 15 763 BC is widely accepted by the defenders of a middle chronology, but three ignored solar eclipses from the reign of Esarhaddon would affect the calculation drastically.

The Neo-Assyrian Empire is usually considered to have begun with the accession of Adad-nirari II, in 911 BC, lasting until the fall of Nineveh at the hands of the Babylonians in 612 BC.
In the Middle Assyrian period, Assyria had been a minor kingdom of northern Mesopotamia, competing for dominance with Babylonia to the south. Beginning with the campaigns of Adad-nirari II, Assyria became a great regional power, growing to be a serious threat to 25th dynasty Egypt. It began reaching the peak of its power with the reforms of Tiglath-Pileser III (ruled 745 – 727 BC). This period, which included the Sargonic dynasty, is well-referenced in several sources, including the Assyro-Babylonian Chronicles and the Hebrew Bible. Assyria finally succumbed to the rise of the neo-Babylonian Chaldean dynasty with the sack of Nineveh in 612 BC.