Drowned city of Brittany: Ker-Ys, the city of Ys

The legend of the wicked and drowned city of « Ys » is perhaps the most famous tale of Brittany’s folklore and popular culture. There are many regional variations of the story across Brittany, however, the main storyline tells that in the early days of Christianity the city of Ys, or Ker-Ys, was the richest trading port in the Atlantic. Ships and merchants from south and north came to the Bay of Douarnenez in south-west Brittany to buy and sell luxury goods. The city was rich and lively, but it was also too much given to lust and sin as to arouse the ire of Breton Saint Gwenole, who foretold the city’s ruin. 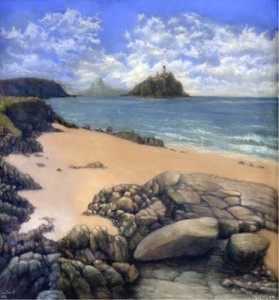 The city of Ys was protected from the ocean by a strong dyke and by a gate built into the dyke to take the outflowing tidal water, and only king Gradlon alone possessed the key to the gate. One night, while king Gradlon was sleeping, princess Dahut stole the key from his father for the purpose of opening the city gate for her lover. As she opened the gate, the ocean immediately rushed in and submerged rapidly the wicked city.

After the city of Ys was destroyed, king Gradlon moved to the city of Quimper and kept a low profile for the rest of his life. As to his daughter Dahut, she was changed into a mermaid and was condemned to sing her remorse forever in the bay of Douarnenez, where she loved and feasted. Popular folklore tells that she often appears to fishermen, combing her long golden hair and luring sailors to their doom. It is also believed that when the sea is calm one can hear the bells of the church of Ys ringing from the depths of the bay.